Responding to the challenges facing Europe through territorial cohesion, and the key role of intermediary cities in achieving this cohesion were the main themes throughout the three days of the "Think Europe: Commitment 2030" summit held in Soria, which presented an opportunity to reflect on the necessary cooperation between spheres of government at European level to achieve territorial cohesion.

In addition to mayors and elected representatives from the cities of Soria, Madrid, Avilés, Santander, Seville, A Coruña, Murcia, Aranjuez, Terrassa, Nigrán, Granollers, Palencia, Trujillo, Benavites, and Legazpi and the presence of the Provincial Governments of Soria, Cordoba and Barcelona met in Soria, convened by the city of Soria, the network of United Cities and Local Governments (UCLG), the Spanish Federation of Municipalities and Provinces (FEMP), and the Council of Europe. Further, the event had an important presence of the Spanish government, with the Minister of Territorial Policy and Civil service Meritxell Batet, Minister of Culture José Guirao, the Minister of Industry and Commerce Reyes Maroto, as participants throughout the three days. 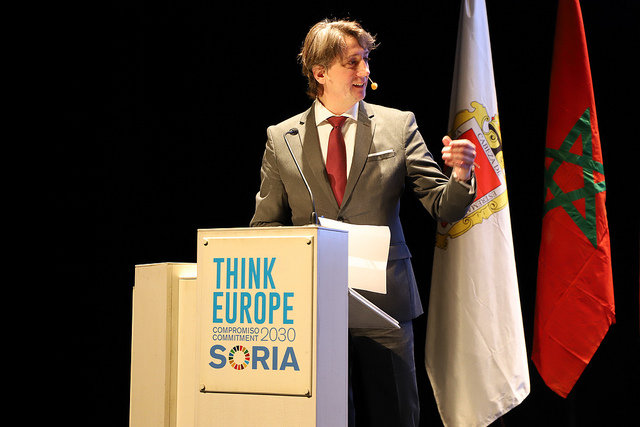 In addition to the strong presence at national level in Spain, the event had a strong international participation, with the presence of the mayors of the cities of Chefchaouen, Valongo, Sindelfingen, Nil and Nikki, as well as Abdelahad Fassi Fihri, Minister of Planning, Urbanism and Housing of Morocco, showing the growing recognition by national governments of the role of intermediary cities as an essential part of territorial development.

"The protection of intermediary cities is key to cohesion and balance, and it is these cities that will allow us to begin the repopulation of less populated areas", Meritxell Batet, Minister of Territorial Policy and Civil service, Government of Spain.

"We are aware that Europe has to be present in European territories, that Europe encompasses citizenship, territories, all cities. This is why we are summoned here today, faced with the need to think about Soria, Europe and the world", Carlos Martínez, Mayor of Soria.

Europe and the cohesion of its territories: Challenges and opportunities of urbanization

Territorial cohesion was one of the key themes of the "Think Europe" debates: the panellists discussed the role of intermediary cities in combating the phenomenon of depopulation in territories, as well as their needs and future prospects. In particular, the need for adequate financing and investment in infrastructure capable of generating competitive advantages in intermediary cities became clear.

Only if intermediary cities have access to sufficient funding and adequate investment - particularly in infrastructure - will they be able to respond to the challenges of urbanisation, and repopulate territories that are currently being emptied, including - in Europe - provincial capital cities. Intermediary cities hold the key to leaving behind the disconnection between the urban and rural worlds, but only if they are properly equipped, and measures must be taken to make it easier for these cities to fulfil this function.

"We are here to give an operational dimension to global agendas, to assess how to do it together. What is being done in Europe impacts the rest of the world, and that is why we think of cohesion as a central axis for Europe and for intermediary cities", Mohamed Sefiani, Mayor of Chefchaouen.

"We need to reflect on the rehabilitation of territories so that economic development is more equitable, more democratic. Intermediary cities are key to this, they are the cities of tomorrow and they are key to maintaining territorial cohesion", Abdelahad Fassi Fihri, Minister of Planning, Urbanism and Housing of Morocco.

The participants in the Forum mentioned the opportunity offered by the DSOs to act as a spur to cohesion, to vertebrate social and territorial cohesion through common objectives, with an agenda - the 2030 Development Agenda - shared by all actors. These objectives, however, will only be achieved by taking into account all spheres of government without leaving any territory behind. 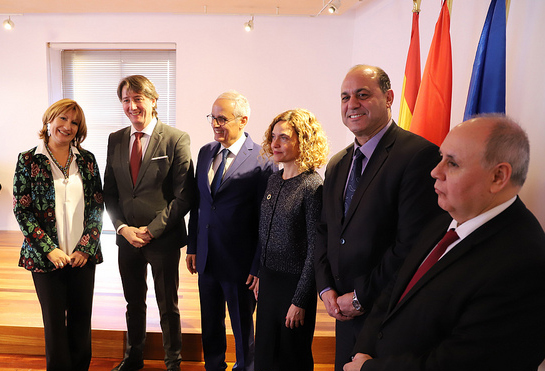 The "Think Europe" summit offered a historic opportunity to address the future of intermediary cities in Europe and North Africa with a bilateral meeting attended by Minister Meritxell Batet, from Spain, and Minister Abdelahad Fassi Fihri, from Morocco. A historic meeting between government representatives took place by invitation of local governments. This meeting tackled the development of an agenda and a joint strategy of intermediary cities to take advantage of their potential to transform and cohesion the territory.

[Read: In Soria, Spanish and Moroccan Governments meet at the initiative of mayors to address the future of Intermediary Cities]

In addition to the bilateral session, the Working Session of the Forum of Intermediary Cities, which met in Soria within the framework of the Think Europe event, debated the steps to be followed for the strategy of intermediary cities towards the UCLG Congress in Durban, which will take place in November 2019.

These proposals include an awareness-raising plan for intermediary cities, with the aim to change the narrative around intermediary cities and place them at the centre of global political decisions. The cities of Urla, Terrassa, Chefchaouen, Cuenca, and Soria (with one more to be confirmed) will lead the seven action lines of the Forum - Migration, Eco-growth, Dialogue between Citizenship and Local Governments, Territorial Social Justice, Culture, Climate Change and Heritage, and the Territory as an Eco-Responsible System. This session was key to finalizing the Soria Declaration of Intermediary Cities, which would be publicly revealed in the conclusions of the meeting.

"Europe is based on a network of Intermediary Cities, in continuous link between the urban and the rural. It is fundamental for us because we do not expect new global cities on a continent with a declining population", Fréderic Vallier, Secretary General of CCRE-CEMR.

Territorial Cohesion, essential for the future of Europe

"Think Europe" also made addressed what importance the European Union attaches to the territorial issue, and how territories can be developed through European management policies. The need for tangible multi-level governance and for growth to be based on the 2030 Agenda was identified by the panellists as a necessity.

UCLG's Community of Practice of Transparency and Open Government addressed, in a panel with guests from local governments who shared good practices, the role of open government and transparency as gatekeepers of democracy and as a link between governments and citizens.

Throughout the session, the links between the 2030 agenda and the values of open government were addressed, and panellists argued on the ways in which transparency could alleviate the disaffection between citizenship and politics, as well as what elements a government must truly fulfil to be considered "open", and what role open government can play as a dike against the re-centralizing tendencies that are occurring in some European governments.

"In constructing our political discourse we must base it on the ODS. We must be able to build a territorial strategy between several actors. We must get used (large cities) to working in a metropolitan environment", Juan Espadas, Mayor of Seville.

The Mayor of Soria, Carlos Martínez, the Minister of Industry and Commerce, Reyes Maroto, and the General Secretary of UCLG, Emilia Saiz, closed the event by presenting the Soria Commitment and pointing out how the cities that had attended the event, regardless of their size, showed common objectives. The Soria Commitment is the roadmap for intermediary cities, and its keys are networking and collaboration between cities - particularly between intermediary cities - to put citizens at the centre of political action and ensure that no person and no territory is left behind. 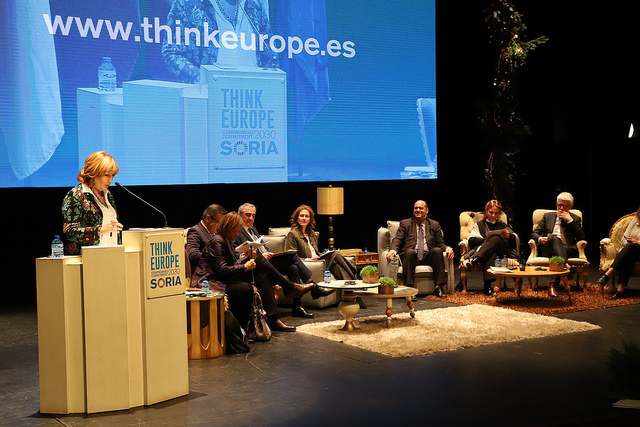 "We have agreed on the need to weave a network of alliances to achieve the objectives of our citizens. We must focus political action on public policies that generate well-being", Carlos Martínez, Mayor of Soria.

"We are not here just because we want to put all the cities on the map, but because we are convinced that, in order to transform the social model, we have to think about it from cities like this one, and with the help of big cities. This solidarity is very important, and it is why we have written a commitment together", Emilia Saiz, Secretary General of UCLG.

"Our objective is to improve people's quality of life and, for that, we must focus on the local. What we do to combat the demographic challenge is important, and in order to solve it we must present cross-cutting policies that ensure that territories are on the public agenda", Reyes Maroto, Minister of Industry, Trade and Tourism of Spain.